Milosz writes from the abyss of the human self, confronting the voice of nihilism that calls into question ‘the calling of men.’ The phrase is double: the meaning of the human being AND the expressions of ‘men’ in light of the mystery of being.

Thinking in the between honors the differences; nihilism is a form of reductive rationalism. The poem as an expression of the between remains true to the question in its plurivocity. For Milosz the metaxical style expresses the central mystery of apophatic theism. ‘For Christ’s sake’ reorients the reader in the abyss of the question towards the religious horizon without crossing the line into idolatrous certainties. Finitude circumscribes faith. 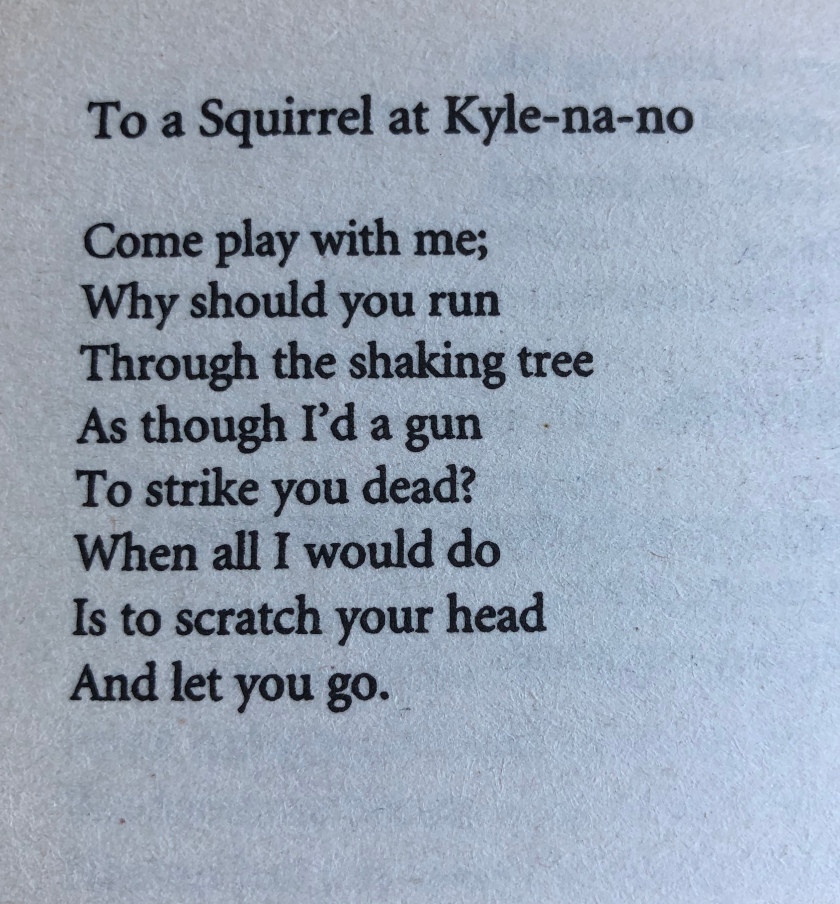 Does such a trivial moment — don’t say it didn’t happen —- deserve even a metrical exercise?
This jaundiced question, so full of resentments and aesthetic prejudice you might think nihilism and bad taste are connected.
The question observes the contingencies of the between—-the asymmetric relativities of actual experience. It is not answered. But it reasserts, in the careful build of meter and rhyme, the enduring and often depressing limits of communication between others. But through lyric’s equivocity— which is not mere relativism —- the ‘intimate universal’ of a porosity between the divine nothing and created creatureliness is itself acknowledged.

To wit: lyric witnesses the between as it has conceptually evolved in Modernity as a response to Nihilism and reductivism. . For the between— and lyric—equivocity means not meaninglessness but saturated understanding beyond system. ’Myth’ in Vico’s sense.

The lyric embodies moments of ontological worth and in that sense, outside further definitions of discipline (Zen, apophatic Christian prayer, and so on), claims its central place in culture.

Among the current categories of poetics is the ‘surd.’ It goes easily — too easily— with nihilisms of various sorts. It suggests that ‘mystery’ by definition is absurd. So much for ‘myth.’ In opposition to absurdity as the ground of being, Desmond argues for a ‘fertile void,’
a charged field of possible meanings in which our being is embedded before any self-determination. This field is what he calls the ‘intimate universal.’ As a ‘sense’ of being, it is the first, the ‘idiotic.’ So: Not universal in the old sense of a cause from which all being(s) may be deduced , but ‘pre-‘ every determination. Myth and story ‘idiotically’ (as in village idiot) connect with this ‘deep background.’

To sum up: As we struggle free of the conceptual givens we confront the givens of experience, and even that category needs mindful attention. Call it the ‘surd’—-from absurd—- once again to escape nihilistic implications in favor of the ‘pre-subjective, the ‘universals’ embodied in myth and religion, folk tales and stories by masters such as Dickens, Pynchon, Gaiman and countless other idiots to whom we owe our sanity.

Issa (a student of Basho famous for his delicately real insect haiku) writes:

From the Great Buddha’s
great nose, a swallow comes
gliding out

(Sam Hamill’s translation). The translator created a dot grid of hard ‘g’s’ from which the swallow ‘glides,’ the ‘humor’ being rooted in an intimacy of living things that predates/transcends even the statue of Buddha if not what it ‘refers’ to. It’s absurd and totally real and even sublime.

The idiotic poetics of this ‘intimate universal’ is explored in William Desmond’s The Intimate Universal (2016). The text above is from p 206).

Poems exert a deep influence on their creators and readers. Some are returned to over and over, making available profound resources of understanding comparable to the best of friends. This companioning power makes the space of the poem a shared space. As William Desmond puts it, the ‘between’ is a hospitable space, regardless of genre. The quality of communication made possible in the between is MORE than the give and take of dialogue. The communication model of the poem is not defined by the dialectic of concepts but by an original flow of energy known to poets as unnamable. Czeslaw Milosz addresses this in a ‘last poem’ (see Selected and Last Poems 1931 — 2004, p 303.)

The space or between of the poem—-between origin and apocalypse—- assumes the author is always in dialogue, never alone. Writing is a lonely calling we say, ignoring the originary sense of being called. But the space of the poem may address the silence too.

Ivy will be the final flower
Of life, as it has been before.
Bays and oak leaves? Not a chance.
When history bows to circumstance
it will be ivy that survives
The evidence of our vanished lives.

Derek Mahon ‘Ivy’ from Against the Clock.

Can a poem disobey Derrida’s absolutist rule ‘there is nothing outside the text’?

Reading poems from other traditions help see through the assertiveness of postmodern ideology.

Li Po: ‘Staying the night at Summit-Top temple,/ You can reach out and touch the stars.// I venture no more than a low whisper,/ Afraid I’ll wake the people of heaven.’

The behavior that ‘goes with’ a belief in the ‘stars’ is performed in the narrative AND the inner decorum of the poet. The peace of mind assumed here is conveyed by that low whisper and the ‘fear’ of crossing a cosmic line.

Li Po was ‘culturally’ aware of what was inside and outside Ch’an poetics. Complex irony is not necessarily ‘deconstructive.’

Derrida’s hermeneutics is so reductive it would corrupt our capacity to ‘read’ and enjoy this poem and many like it.

Trying too hard for clarity, we speak casually of ‘space.’ I can say ‘the space of the poem’ and proceed. We think: well, I mean ‘negative space.’ Or ‘neural space. But the space of a poem is not ‘neutral’: it is full of promise. Think how quickly we play along with the potentialities of the space outlined by a fragment of Anakreon (Sixth Century B.C.). I open Davenport’s 7 GREEKS (New Directions) to Anakreon fragment 120:

‘Eros melting in the mouth.’

Full of possible meanings, some more likely than others. No point in assuming a zero-grade space. This isn’t geometry.

Writing about the dangers of religious enthusiasm, Desmond says, ‘Do not worry. The discipline of finitude will keep us in check.’ This discipline, he goes on to explain, is the ‘mindfulness of the ontological sources and resources of the between, its riches and its snares’ (‘God and the Between,’ 128).

We write about life in ‘the between’ precisely because ‘the between’ names the otherwise unnamed space where we live between the extremes of the immanence of life and the nothingness of death. Those extremes mix in the between but neither defines it. But words sometimes lure us into speech about what we cannot know.

Words are slippery. Poets struggle with words: too many of them —- certainly the key cultural concepts—-have such authority that we get carried away when we use them. Freedom is a good example. A key concept in our lexicon of desire and yet exceedingly hard to pin down.

So what is this discipline of finitude that inoculates us from the contagion of such words?

Mindfulness regarding the ontological sources and resources…? Poets dislike the word ontological. It is metaphysical. And yet the word, properly handled, does clarify a source of basic confusion.

Traditional grammar and logic has things to say about certain concepts. Being is the source of existence, but there is no ‘it’ there. Everything that is ‘has’ being, being being the exception. But then maybe being isn’t in the valid senses of ‘is.’

Being may be the most important source of confusion for poets. Do we experience Being? Not in so many words. But it’s key! Czeslaw Milosz uses the language of religion to write about Being as ‘presence’; ‘Presence’ presides everywhere and every being rises ‘within one enormous unknowable Being.’ (‘Presence,’ dated July 23, 2002 in ‘Selected and Last Poems, 1931-2004’)

The caps on Being are among the disciplines of finitude.

The scary blank page is a common literary myth with several variants. It may be invoked to explain writer’s block (a sub-myth?). Among the Symbolists it was arrayed in the vestments of concept-repelling virginity.

We think of a text as a space open to mindful or mindless construction. Of course once you start constructing something you have to make choices. There are all sorts of literary choices (tone, genre, etc), but even more fundamental ones.

Any sort of composition involves the ‘senses of being’ (Desmond). These senses are implicit in our attitude toward or feelings about reality. (Cf the ancient rhetorical topics ethos, logos, and pathos.) Desmond usefully enumerates four senses: univocal or strictly objective; equivocal or ambiguous; dialectical, or determined by logic and desire; and metaxological, a blend of these senses into s dynamic ‘open whole’ which reflects our desire to be released from determinations and embraced by energies associated with justice and love.
Most texts move through the labyrinth of the senses of being toward the metaxy, or space of creation. Certainly successful texts do so, with varying degrees of mindfulness.
The good news is that the flow of creation is not so much a matter of deliberation as a matter of performance based on observation, study, and practice. Most of the moves from sense to sense become a matter of muscle memory. Composition is like sport, like cooking, lovemaking. Mistakes may be made. In revision, transitions may require a deeper mindfulness.

Wallace Stevens’ ‘An Old Man Asleep’ implies the between between ‘the self and the earth’ and ends with one of Stevens’ rapturous though apophatic images: ‘The river motion, the drowsy motion of the river R.’ The between space is one of passage between extremes, extremes like ‘the river R.’
You might call the between the poetics of myth, of story. Poets like Stevens, knowing that ‘these extremes are recessed in the domestication of everyday life’ (William Desmond, The Gift of Beauty and the Passion of Bejng, p. 253), make poems by telling stories about ‘diverse extremes: birth and death, nothing and infinity, abysses if abjectness and superlatives of heights, inferiorities of secret intensity and exteriorities of vast extension’ (ibid.).
The between is the grammar of human consciousness.