The emergence of Greek lyric in the seventh century B.C. provides plenty of evidence for the origins of the lyric in ‘the between.’ Sappho says, ‘Some say a host of horsemen is the most beautiful thing …’ (Fr. 16). Sappho says, ‘He seems to me equal to the gods’ (Fr. 31).

This space between speaker and auditor bristles with energy. It strains under the pressure of disagreement. It’s choked with passion. It’s threatened and shaped by silences of various kinds. Its wholeness is only apparent, for it represents ongoing acts of attention that are rewired with each reading. Interruption is as essential to the life of poetry as to the life of conversation.

Forms emerge from those readings that preserve the space between even as the communicants change with time. While poetic form is sometimes reduced by commentators to repeatable ‘formal’ elements (the Sapphic stanza), the specific form of each poem emerges only from its self-consuming passage through the between; the surprise attending its appearance may be compared to the appearance of a butterfly on a warm spring day. But the individual poem lasts longer than the particular butterfly.

In short the poem between is the evidence and source of a community that endures. The Greek name, found in Plato’s dialogues, for this creative space is metaxu.

The grammar of form branches into concepts of perfection: we say of an athlete, she has perfect form on the high beam. In describing lyrics we may spontaneously express ourselves in hyperbolic terms of perfection.

Then too, on the creative side, the process of composition has a transcendent diagonal that indirectly pushes the poet toward perfection, almost never acknowledged as such.

Perfection as a goal internal to composition shows its influence in the voice/voices as realized by the poem. The poet herself is implicated in this final sound both as auditor and musician.

In its embeddedness in culture and cultural values including hierarchies and proportions, the self of the poet is musical. In this the poet is representatively human. Indeed all flesh is musical and sustained by principles and powers we cannot reduce to thought.

Form emerges from confluences of image and thought. This small perfectly imperfect poem —- note the punctuation—- follows the sequence of realization. First, what’s out there. Then, our subjective interpretation of what’s out there. Then our search becomes reflexive—-‘it shines with reflective light.’ Aporia: our meditation grounded on the stony threshold between self and other. But this threshold creates a community of being. Together we wait for the sun’s return.
Where some find ‘the pathetic fallacy,’ others will accept their own partnership in the unfolding of the poem. Try reading Li Po and other seminal Chinese poets with the modernist thing about ‘the pathetic fallacy’—-impossible! The corrective model is shadowed in the classical concept ‘participation.’ Horace is full of such pathetic touches.
Note on punctuation: the flow of meditation in the between authorizes play with conventions which left to themselves disfigure meditative ‘spontaneity.’ The scare quotes are not agnostic or ironic: the arrival of the poem as an open whole depends on sources we cannot and should not control. On the contrary, the poem happens first in these depths. The poet’s punctuation releases the poem in its meditative flow.
This meditative pattern is attested in poetry from all ages and places. When Zagajewski lets it appear in its simplest form, he becomes a witness to form—-and we his readers likewise. So the image of our selves as orphans in the night with the sea models the experience of reading the poem.

On your thigh I count syllables touched 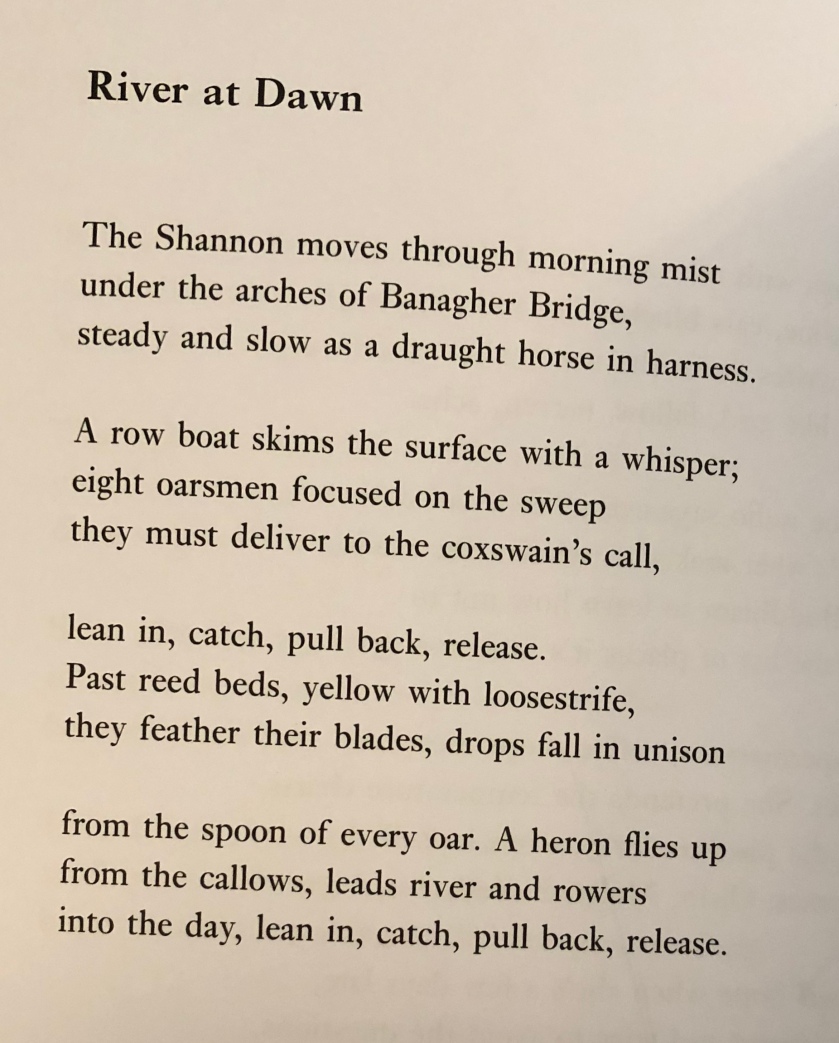 From Jane Clarke The River Bloodaxe 2015

Jane Clarke’s reserve is the pit of her power. From the comparison of The Shannon to a draughthorse in harness, the poem quietly, effortlessly, unfolds its mystery. The imagery reaches a climax with ‘drops fall in unison,’ and many a poet would end things there. But the image isn’t everything. And here we are blessed with a kind of revelation of form as disciplined sequence. The poetry of what happens has become a cliche. Here what happens is seen as a process experienced by those willing to follow the ‘master’ or so wonderfully here the heron into the day. We lean into experience, we ‘catch’ as the rhythm takes over, we pull back in yielding to the momentum and glide, we release.
Isn’t that what poets — what poems— do? Isn’t that the ‘inner form’ of the poetry that happens with and for us? Isn’t that fulfillment of the promise of flow in the best sense?
It’s a really good poem that makes new and vital some of mankind’s most intimate intuitions.

To reach Metaxyturn, where the participating consciousness becomes the site of agapeic otherness, the work of art goes through two stages. 1. Through dialectics reaching the abyss of the self on the edge of abyss/the divine passage (think Beckett). Here asymmetric relativity replaces the relativity of dialectic. Dialogue with otherness interrupts. 2. Witness. The overfullness of presence of the divine other’s passage in the between. Think Bonnefoy’s resolute fidelity beyond nihilism. Presence. Hope.

from Richard Bringhurst, Everywhere Being is Dancing. Pages 111-127, an essay exploring the early history of literary criticism.

This is from Pindar’s 7th Nemean Ode.