The short poem or ‘lyric,’ unlike the the genres accounted for in the poetics of antiquity, seems to lack identity other than brevity. But paradoxically in Plato’s attack on the poets in The Republic, the cat is let out of the bag. Attacked for the transgression of mimesis, or representation of reality, poetry became enemy to idealism. But elsewhere in his dialogues Plato talks about ‘metaxu’ or the experience of the space between our bodily existence and the otherness of consciousness. And the idea of the between has provided our postmodern thinkers with the seeds of a new poetics.

In Eric Voegelin’s narrative of the search for the Beginning (In Search of Order, 2000), he uses the Platonic concept ‘metaxu’ to name the participatory mode of consciousness. He argues that concepts like ‘transcendence’ and ‘immanence’ do not refer to objects in space but structures of consciousness. The ‘language’ and ‘the truth of of reality becomes luminous’ (see Introduction).

Voegelin’s exposition leaned on paradoxes and complexes. In the late ‘80s the Irish philosopher William Desmond began publishing essays and books on metaxological metaphysics. Among his other books (his approach to philosophy has been dubbed ‘encyclopedic’), with ‘The Intimate Universal’ (2016) Desmond has produced a fully comprehensive essay on his metaxological metaphysics. His lifelong inquiry has produced a new range of language symbols for what Voegelin, following Plato and Aristotle, had called participation.

I have used metaxic thinking in reading and editing and commenting on poetry for decades. It is now my belief that metaxical structure is essential to poetry and becomes thematic in the narrative of the most popular form, the short lyric. Just another paradox in the long digressive story of the ‘between’; the term is now—2020– quite a la mode.

Let’s look at a text in order, as Voegelin says, ‘to calm things down.’

This poem from Michael Longley’s 2014 collection ‘The Stairwell’ is a wonderful example of poetic craft. An anecdotal base becomes the basis for exploring contingencies of our life in the metaxy or between. The flight of the arrow across the formal stanza break shows how the aesthetics, the descriptions, of events are not mere subject matter but the dynamics of life. The poet fulfills his purpose by presenting the fluid mix — the brotherly arrow—- where love and disaster mirror the fullness of time. All the details meld in the moment of time’s arrow stretching from zenith to end.

Poetic precision seems to model something absolute and primordial. Inside and outside are transparent and, in the vocabulary of metaxical being, ‘porous.’ In William Desmond’s metaxical analysis, the shape of the unity of happening opens dynamically. His word is ‘porosity.’ As we see on page 211 of ‘The Intimate Universal,’ the concept of ‘porosity’ banishes the imagery of the between as a neatly-bounded moment that fulfills itself in becoming an object, a poem. Poems, like betweens, are open wholes. 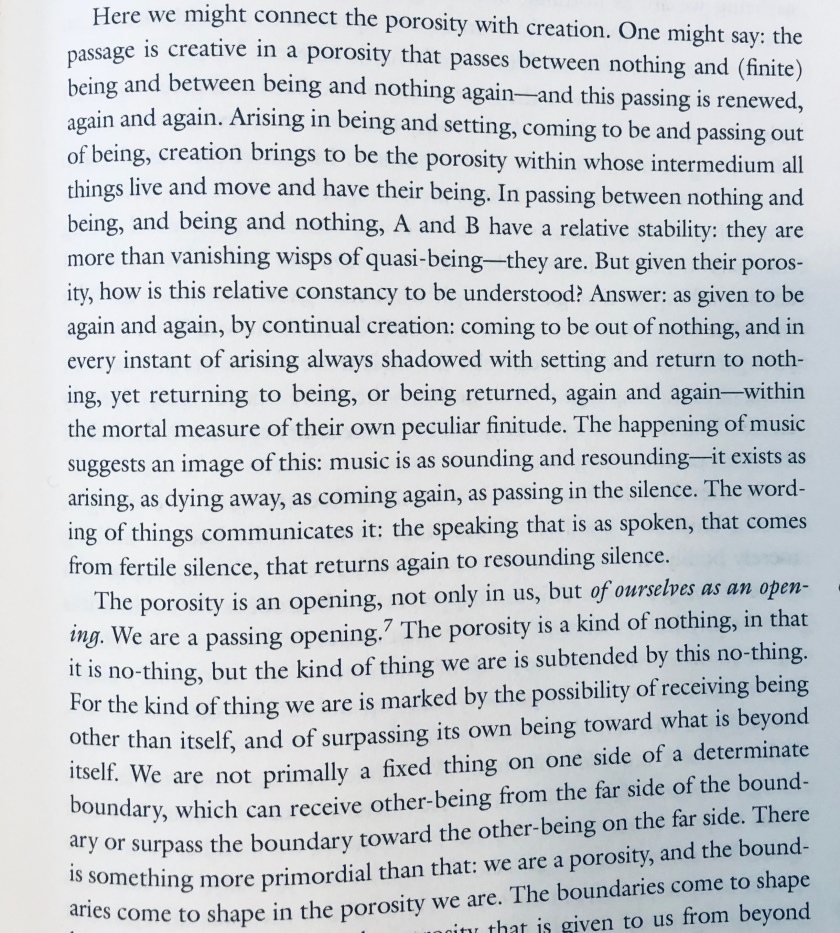 The popularity of the concept ‘the between’ makes it necessary to distinguish what we mean from all the popular usages. William Desmond offers a new way of talking about the between as ‘porosity.’ Desmond borrows the term ‘poros’ from Plato’s myth of the conception of Eros from poros — plenty— and penia — want (Symposium). Defining the concept in its Platonic sense as ‘metaxu,’ or the space wherein we grasp events both as ‘happening here’ and happening in light of ‘the beyond,’ Desmond emphasizes ‘passage’ —- as for example a passage of music—-as the theme of metaxological being. Everything flows from nothing toward eternity, the limit of our finite between. (Elsewhere, as for example in the third of his between trilogy, ‘God and the Between,’ Desmond presents extended analyses of key concepts like eternity.)

One of the metaphysical problems with the concept of the metaxy has been our inclination to reify the metaphor of space. The boundaries of the between define it, but they do not determine it. A marriage does not determine the passion of the spouses. Their love flows from something deeper ( at least if the marriage is ‘authentic’).

As this passage from ‘The Intimate Universal’(2016) argues, what happens in the between is like a passage of music, and the metaxological analysis, informed by the asymmetrical here/beyond, pushes the analysis to the dimension of selfhood (Voegelin’s consciousness). In the Eros of our being we transcend ourselves. Rather than the Idealistic concept of transcendence, in which the self returns to the closed whole of Godself, we need a metaxological concept. That is: We are ourselves porosities. ‘We are a passing opening.’ The creative act familiar to poets bears witness to Desmond’s refiguration of the ancient idea of metaxu (see Plato, Symposium, 202b5.)

Longley’s poetry combines many discourses, including Homeric, and the transparency of his porosities are unique. But as I have shown elsewhere, short poems in many cultures exhibit the narrative of the between: moving from objective situations through metaxological dialectics to the limit of self-consciousness, at which time the imagery of the universal open whole emerges in the form perchance of Michael Longley’s arrow. One never knows.